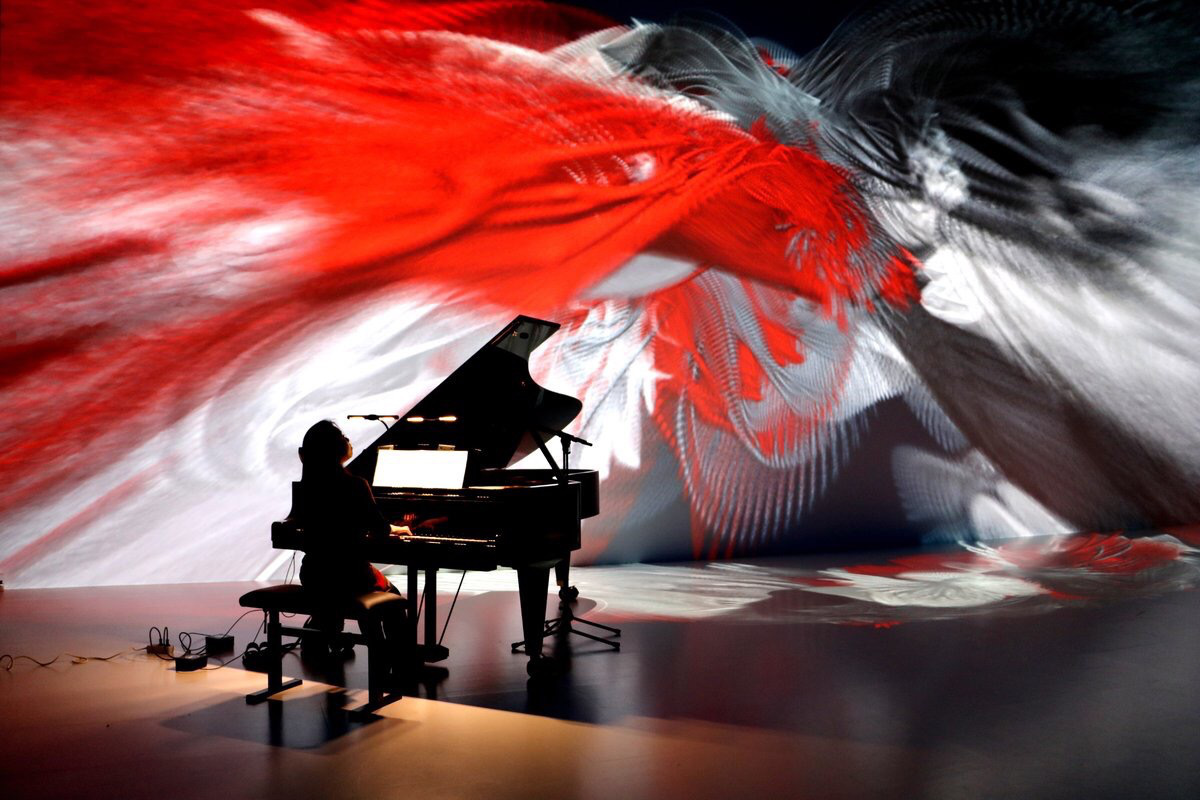 Pianographique is a series of collaborations of real time visual artist Cori O’Lan and Maki Namekawa. The visualisations are not videos that are more or less synchronous to the music and it is also not the musician’s playing to prefabricated material, they are jointly created together in the moment of the performance.

As with most of Cori O’Lan’s visualizations, all graphic elements are derived directly from the acoustic material, i.e. the sound of the music. For this purpose, the piano is picked up with microphones and these signals are then transformed by the computer into a multitude of information about frequency, pitch, volume, dynamics, etc… This information, in turn, is used to control the graphics computer, create graphical elements or modify them in many ways. Since these processes take place in real time, there is a direct and expressive connection between the music and visual interpretation. The visualization is actually not “created” by the computer but much more by the music itself – the computer is rather the instrument, the brush operated, played by the music.

The visuals are prepared for a panoramic multiscreen setup with three projections, thus the videos presented here are barely reflecting the live impression of the performance… try to watch them in 1080p resolution and imagine them really big. The videos of Maki Namekawa which are used in this demos have been recorded separately by Landsmann + Landsmann. The Music is available at: http://www.itunes.com/PhilipGlass. The first video presents small excerpts of all 20 etudes.

Interludium A was composed in 1982, two years after the democracy movement in Gwangju was crushed. This was a matter of profound concern to Isang Yun, who in the late 1960s, had himself been victimized by the political despotism of the military regime in power at the time.
“A composer cannot view the world in which he lives with indifference. Human suffering, oppression, injustice . . . all that comes to me in my thoughts. Where there is pain, where there is injustice, I want to have my say through my music.” – Isang Yun, 1983

The realtime visualization of this piece starts out from visual associations with the sheet music and piles up a complex geometrical structure, the individual elements of which are subsequently dynamized by parameters directly derived from the live sound of the piano.
Like a huge skyscraper complex or construction plans of a futuristic urban machine that plunges into a dark night mood with the quieter passages – deserted, technocratic. But again and again, with certain frequency and dynamic ranges of the music, distinct light and colour moods appear within the structures. With the motivic progression of the music, two fragile dancing figurines emerge from the geometric structures. Shaped from dense, organically flowing lines, deep red colored, reminiscent of animated Asian calligraphy. The special features of Deep Space 8k with its high-resolution projection screens on the wall and floor are used to create two different perspectives of the structures and dynamics derived from the music.

“The Sonata is colorful, wild, excitingly jumpy…” – with these words Malte Hemmerich begins his review of the premiere of Philip Glass’s latest work at the Klavier-Festival Ruhr on July 4th 2019 in the Frankfurter Allgemeine Zeitung. He further continues “… it is a prime example of Philip Glass’s piano music with its opposing rhythms, and there are also many other familiar elements from the composer’s etudes and individual works. In such a wild kaleidoscope, however, they appear here for the first time. It is Glass’s most demanding piano work to date; the rapid succession of virtuoso octave jumps are close to the limit of playability. Namekawa breathes this music, the piece is an example of how an incomparable unity can arise from the close collaboration between composer and interpreter.”